The History of the Gardens

WHY A JAPANESE GARDEN IN TRAMORE?

The idea for these gardens first arose in 2012 when Professor Bon Koizumi , the great grandson of Lafcadio Hearn, with his wife, Shoko, visited Tramore to retrace the steps of his famous ancestor who had spent his childhood summers in this lovely seaside town.

A fortuitous visit to the grounds of Tramore House led to the idea of developing a memorial garden there in honour of Lafcadio Hearn.  These grounds had originally been laid in the first half of the 19th century, as a walled garden surrounding a Victorian villa similar to that where the young Hearn resided with his guardian

The concept was developed by Agnes Aylward with the support of Tramore Development Trust, Waterford City and County Council and local volunteers who freely lent their professional experience and guidance. Financial support was obtained from Waterford Council, the Japanese JEC Fund and a number of commercial business concerns, both Irish and Japanese. Contact was maintained with the Koizumi family who were supportive of the project throughout. Construction commenced in June 2014 and was largely completed by June 2015 when the gardens were formally opened. The overall garden layout was developed by Martin Curran, who also managed the construction.
The Victorian and American Gardens were designed by Laura Cassin.

The ornamental timber structures were designed by Mike Roberts. The gardens were constructed by members of the Tramore Community Employment (CE) Scheme, supported by the Department of Social Protection. Further additions to the gardens were made between 2017 and 2019. These included the construction of two authentic Japanese garden buildings an azumaya or Summer Pavilion, constructed to overlook the lily pond; and an ochaya, or Japanese Tea House, which overlooks the stream, bridge and upper reaches of the gardens. These gardens are a Non-For-Profit Social/Community Enterprise now run by Lafcadio Hearn Japanese Gardens CLG and supported by Pobal and Department of Social Protection Community Employment Programme. They are also assisted by many local volunteers.

These gardens tell the intriguing and unique story of the life journey of Lafcadio Hearn. In their style and planting they reflect elements of the gardening traditions of the countries and cultures traversed by Hearn during his varied life. The journey begins in a Victorian Garden which commemorate Hearn’s happy childhood summers in Tramore. Later there is an American Garden and a Greek Garden, followed by a series of Japanese inspired landscapes. Having passed beneath a Fujidana, you will soon reach a traditional Japanese Tea House and Tea Garden; followed by a Stream Garden which leads to ponds and a waterfall and an extensive woodland area.

The main elements of design, in particular the use of rocks and water and the plant selection, are influenced by the tradition of a Japanese Strolling Garden. The 2.5 acre gardens are set on a hillside overlooking the dramatic sweep of Tramore Bay. Visitors are introduced to aspects of Japanese folklore through several stories written and translated by Lafcadio Hearn. These include The Cave of the Children’s Ghosts, and the legend of Urashima Taro.

THE SPIRIT OF THE GARDEN

Hearn’s essay ‘In a Japanese Garden’, published in 1892, was a major source of inspiration for the Tramore gardens. His essay is a work in two parts. It details lovingly the elements of Hearn’s own garden at Matsue, which is still preserved, whilst also providing the reader with a detailed interpretation of the ancient and revered Japanese philosophy of gardening with careful emphasis on the meaning of rocks, trees and other elements in garden design. The Japanese concept of ‘shakkei’ or “borrowed landscape” is adopted in the Tramore Gardens which offer twin vistas, one of densely planted trees in a nearby woodland area, and one of the magnificent Bay of Tramore. Both views are used to extend the visual boundaries of the garden. The garden seeks to achieve a feeling of timelessness. Many Japanese plants, suited to the local climate are used in the design. Moss and gravel, with boulders and undulating features set into the landscape, create enclosures to capture the desired ambiance.

Above all, the gardens seek to draw the visitor into retracing the path of Hearn’s fantastic life journey from West to East, and through their planting and other design features, bring to Western eyes a sense of the exoticism of the East.
This aspect is well captured in this description by two German visitors: 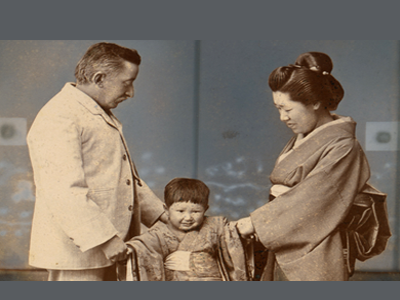 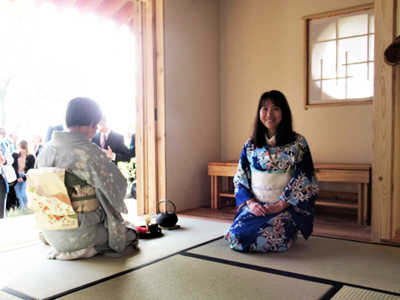 ‘Lafcadio Hearn Gardens is a unique place. It combines the spiritual symbolism and traditional architecture of the East with the western idea of biography. To recount the life story of an Irish-Greek man who, after a long stay in the United States, immigrated to Japan, plants, trees and water, rocks and stone sculptures are integrated into a plot that leads the visitor from birth to death and from earth to heaven. Making specific use of the site, as well as of light and colour, the layout inspires a meta-physical walk and gives way to a fascinating interplay of Japanese folk tales and the search for revelation that lies at the core of European literature since ancient times. Hearn figures as the Spiritus Rector of the Gardens and is remembered as an honourable pioneer of intercultural dialogue.